You are here: Home / Blog / “The Functional Movement Screen (FMS) and How it can Apply to You” – Troy Goetsch, PT, DPT

The Functional Movement Screen (FMS) developed by Gray Cook, MSPT, OCS, CSCS and team is an easy, efficient screening system that is useful for anyone looking to improve upon their movement quality and decrease their risk of future injury. As a Physical Therapist, this makes it a very attractive system to put into use with my current patients nearing discharge, as a general functional screening tool for those who will be beginning a new exercise program, as well as for those looking to improve upon their existing training programs. I wanted to take a second to explain the FMS process, and why having a screen performed may benefit you!

Before discussing what the FMS IS, I think it’s important to first discuss what the FMS is NOT. The FMS is not intended to replace a skilled and thorough evaluation. This is a 10-15 minute screen, designed to assess for the presence of glaring problem areas. Amidst all of this, I want to add a caveat. If you are consistently having pain with movements, and if it will hinder your performance of a screen like this, it is important to seek appropriate care to resolve it. Once resolved, the FMS will still be around and waiting for you!

The FMS is also not a system that will have you blindfolded and tapdancing on a BOSU ball! That may seem silly to picture, but the word “functional” has really been tossed around in the fitness and rehabilitation industries of late. Any number of combinations (vision or no vision, stable or unstable surface, static or dynamic, unilateral or bilateral, etc.) have been grouped together in the name of improving “function”. As a result, the term has become watered down, and even cringe-worthy in many conversations.

Don’t get me wrong. In the rehabilitative world, these can be necessary modifications! Novel exercise consisting of variations of these components is VERY beneficial for improving the impairments, activity limitations, and ultimately function in our patients as they return from injury, trauma, and disease. When it comes to improving function in the remainder of the population, however, there has to be a way to efficiently identify and rate problem areas so that we can better target where we can achieve the best “bang for our buck” in order to both improve performance and decrease injury risk.

This is where Cook’s FMS comes in, a system that does JUST that! The FMS at its heart is a tool that can be used to check for injury risk, to identify major problems in the fundamentals of movement, and to provide a baseline from which to get you on the right track toward improving these.

Cook describes successful athletic performance as being comprised of a pyramid of activity (see an illustration of the pyramid below), in which skill (ex. shooting, swimming, grappling, kicking) is sport-specific. Skill relies on adequate performance variables (ex. speed, strength, agility), which rely on adequate movement fundamentals (ex. mobility, balance, coordination). 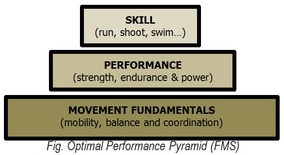 The FMS is a seven movement screen that has you perform a combination of common dynamic movement patterns (squat, high step, lunge), a combination of movements to assess mobility of both the upper and lower body, and a combination of movements to assess stability of your body (trunk and rotary). You are given a score for each component, with a score of 3 indicating that you can perform the activity perfectly, and a score of 0 indicating that it is painful to perform the movement. These are then combined to give you a composite score. All of this takes a total of 10-15 minutes to perform.

Your total score is then tallied up, with a score of 14/21 (or 66%) and below pretty consistently ranking as the point at which people in the populations studied have become at an increased risk of suffering injury in athletic performance. This is not to say by scoring 14/21 you WILL injure yourself, but it does give us a good starting benchmark from which to substantially diminish the risk of doing so!

The best predictor of future injury is having sustained previous injury to an area. That much is non-modifiable. Contrary to much of the previous thought on injury reduction, looking to modify injury risk becomes much less an issue of you being “too tight” or “too loose”, “too weak” or “too strong”, or even “too fast” or “too slow” overall, and more an issue of your asymmetries in these areas. This isn’t just to mean between the right and left side of your body, but the top and bottom, and front and back of your body as well. It’s not to include just your flexibility, furthermore, but your strength and stability, as well. These things ARE modifiable. That is the beauty of a tool like the FMS, which allows for quick screening of the relative symmetry of your body through functional movement performance.

By more efficiently identifying these asymmetries, we are placed on a much better track to resolve them! As such, each FMS screening should come with a personalized plan for improving on those areas that would benefit YOU the most, not a canned program that should benefit EVERYONE the most.

If this is something that interests you, I would encourage you to seek out a healthcare or fitness professional skilled in performing it, and see how you score today! Within our clinics, the FMS is now offered at both our South (14th and Pine Lake) and North (27th and Superior) locations in Lincoln. You can also go to the FMS website and find a qualified professional near you.

Instead of simply adding more and more exercises to an already dysfunctional system, why not first learn to move better, and THEN ask your body to move more? In other words, as Gray Cook states, why not “first correct movement quality, [then add] quantity”?

Troy joined LPTSR as a physical therapist in June 2015. He is Lincoln Physical Therapy’s first sports physical therapy resident, working with Chad Wemhoff at the south office toward becoming a sports certified specialist (SCS). Troy enjoys spending time with his wife and dogs, staying active, volunteering, music, food challenges, and being outdoors. He has several years of experience in training for and competing in the competitive strength sports of strongman and powerlifting.

“What Is Astym® Treatment?” by Chad Wemhoff, PT, SCS